The end of smoking at the Tiki Ti

Our friends at the Tiki Ti, announced yesterday on Facebook, that smoking in the bar would end this Saturday. Word is that they had to hire another employee. Now that they are no longer just a family run business, they need to comply with the 1995 law protecting employees from secondhand smoke. 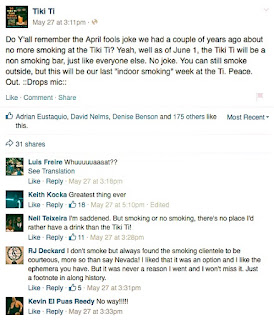 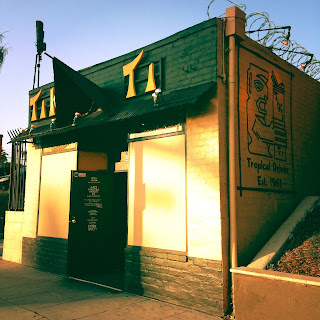 No one in The Hula Girls really smokes all that much, but this is about principle. Tiki is all about theming and transporting the patron to another place and time. It's about the last great tiki bar creating a timewarp sensation by allowing smoking.

If you don't know what makes the Tiki Ti so special, the quick of it is this; Ray Buhen was one of the original "Don the Beachcomber" bartenders and cocktail creators in the 1930s. He worked at "The Dresden" and "Luau" in the '40s and '50s, and opened the Tiki Ti on Sunset Blvd in 1961. His son and grandsons run the place now. It is thee TRUE lineage to the proper recipes of Don the Beachcomber. You can't find a better Polynesian cocktail in southern California.

This might have been the last bar in Los Angeles to allow smoking inside. And what a more appropriate venue for that kind of thing than the Tiki Ti? While the Buhen's probably don't think of their bar as a novelty 'retro' bar, it indeliberately kind of is. The building is largely unchanged since 1961, the cocktails were born in the period from the 1930s to the '60s, and most of the interior decor is true vintage tiki (with a bunch of other ephemera thrown in as well).

So what if MadMen, because of today's heightened political correctness, didn't show cigarette smoking on the show? It would have been a totally different feeling show. Not true to the era that it was representing.

That is what smoking adds to the Tiki Ti. It feels like an exotic place in Los Angeles. Damon's doesn't feel like that, either does The Tonga Hut or that poor shell of a Trader Vics at the Hilton. The smoke adds age and a different angle to the Tiki Ti. Now I know that you can rebut me about them playing music that isn't absolutley correct to the theming, or not all of the decor being 'era appropriate', but for some reason, that stuff is easier to look past. Perhaps it's because of the history and the quality of cocktails that they serve... The whole of the experience there is what makes the Tiki Ti so special. Can't there be ONE last bar in LA that allows patrons to smoke if they like?


Saturday is being called 'Great Smokeout' by Mike Buhen. So pack up your pipes, cigars, cigarettes, hookahs, and whatever else you can smoke out of and head to the Tiki Ti on Saturday!
It's truly the end of an era.

After Laughlin and Palm Springs, we had a couple of days off... Then, it was time to hit the gravel and head out to play a private show in another casino... This time, in Lake Tahoe! 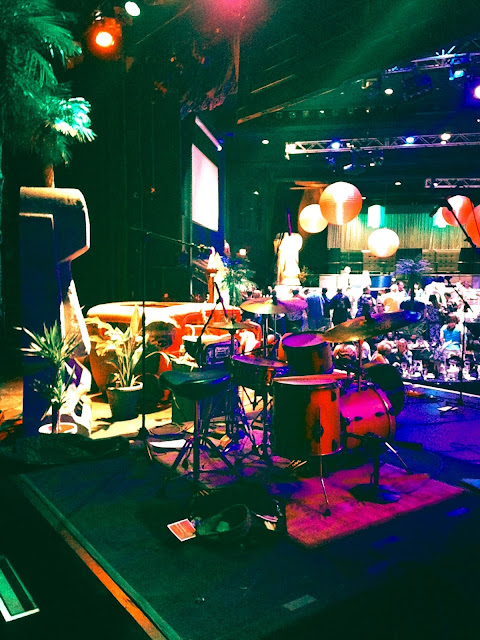 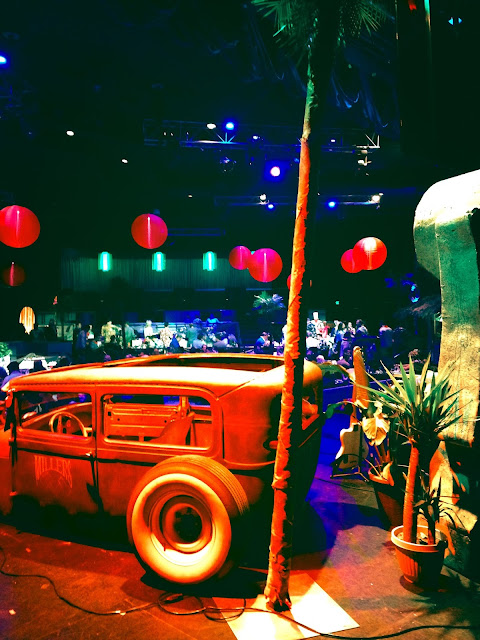 It was a super fun three show trip. With our band having as many members as we have, it's hard for us to go get on the road very often. Sure is fun when we make it work though. I'm very lucky to have a band made up of such amazing and fun people.

If you want us to come, drive out to you, start telling your local clubs or promoters! No telling what we'll be able to make work! Hope you dug the tour photos.
I'm ready to go back on the road! Aloha!