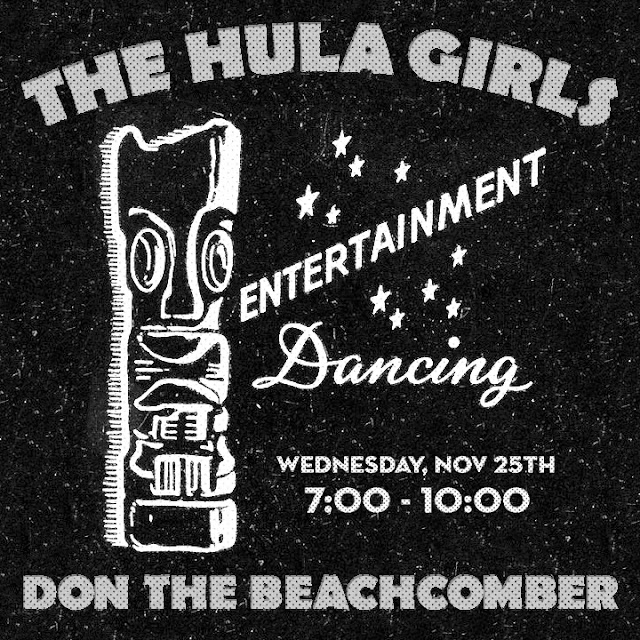 The Curse of the Tiki II (event photos)

I would be shocked if confetti wasn't still falling from the lamps and bamboo decor of the Hidden Village at Don the Beachcomber. It has taken almost a whole week for me to recover from the wild madness that took place at our second annual Curse of the Tiki variety show! 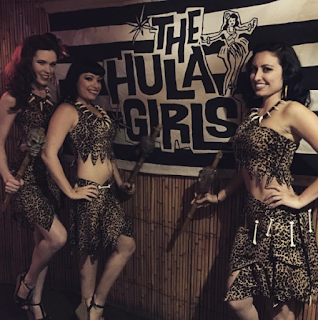 The crowd in the packed room was mostly either dressed in costume or in vintage formal wear. It was a great scene and everyone was ready for a good time!

All photos by Tom Stratton unless otherwise noted.

First up was the amazing Jimmy Psycho Experiment. They played a great set of sci-fi jazz and lounge, interpreting music from Star Wars, the Ramones, and Kiss... all while wearing giant sugar skull helmet mask things. What a cool band and a great way to kick a super weird night off. 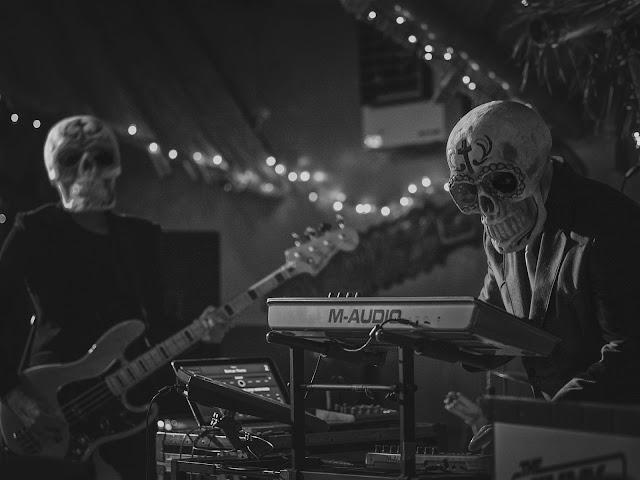 The great Maegan Machine followed the Jimmy Psycho Experiment. She came out toying with her burning torches, fearlessly dragging the fire across her arms and tongue. 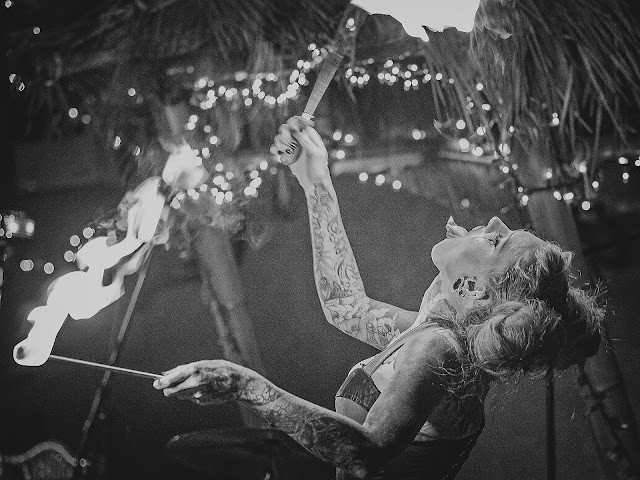 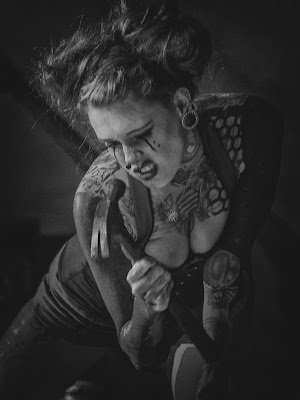 But then things got bad. Like bad, bad. She brought out an industrial stapler and started shooting staples into her arms and legs... then she moved to her ARMPITS. Ugh! How can you do that to yourself?? And she wasn't hardly fazed by the pain. Unreal.

After the stapler non-sense, she upped the anty by hammering a big nail up into her nose. It was a BIG nail. Sheesh. People could barely keep their eyes on the stage.


But then things went from bad to even worse. Her boyfriend, James, came out and began to insert dart-looking things into her forehead. That's when the blood really started. And that's when she finally started looking like she was in pain. Her eyes were glassy and she was kinda wavering in her chair. I'm was trying not to pass out myself. It was horrible. And rad. But really, really horrible. 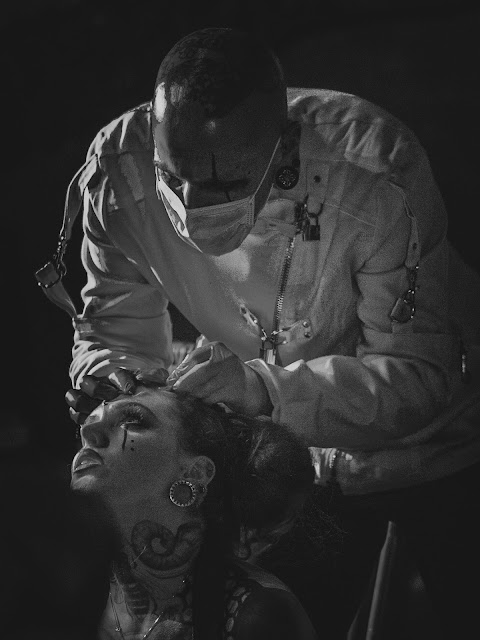 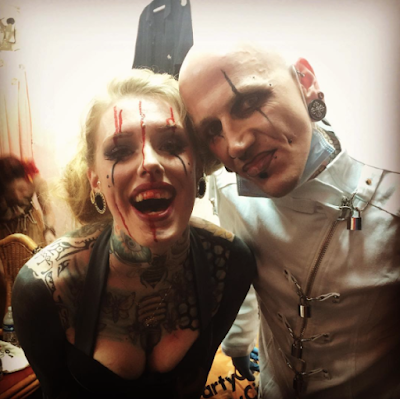 Things actually even got worse after that (if you can believe it). Sitting next to each other, the two stabbed one long needle through both of their cheeks. While skewered together, they bent the needle around so that they could kiss. How romantic... and nauseating. Maegan told me that it's horribly painful. No kidding. That was the last time she said that she would perform that act. Sheesh... I don't blame her.

They put on an incredible show. I took this picture backstage after their performance ended. I was still weak in the knees from witnessing that horrible, horrible display.

Once we mopped up the blood and everyone ordered a stiff cocktail to numb their pain, it was time for the costume contest! Unfortunately, I was backstage, getting into monkey suit during the contest. 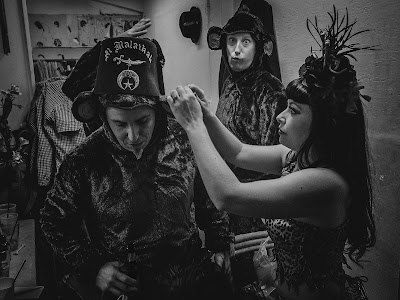 Thankfully, Tom got a picture of the winner of the contest! He was a victim of Alfred Hitchcock's movie, The Birds. What an amazing costume!!

By the way, our buddy, Kevin Stewart, of Big Sandy and the Fly-Rite Boys was playing bass for us that night. How about the face he's making while Audrie is pinning my fez to my monkey head?!


Bird attack in the Hidden Village! 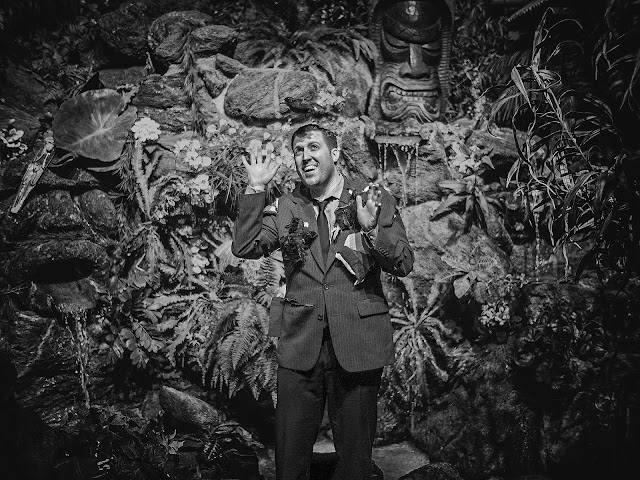 Then it was time for us to hit the stage. The Hula Girls had gone ape! Maybe we were turned into monkeys by the voodoo of our dancers?? 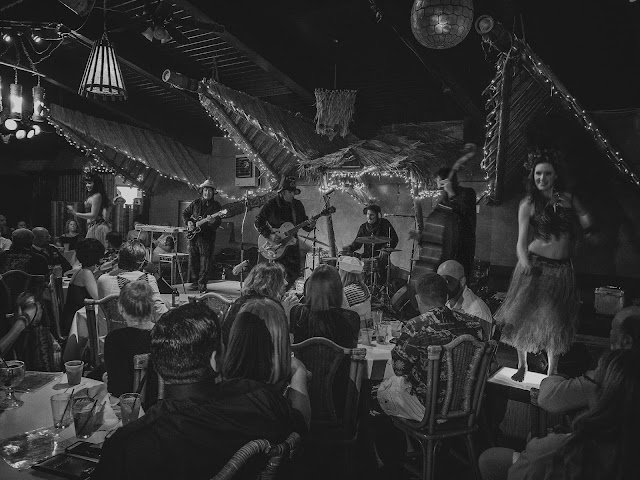 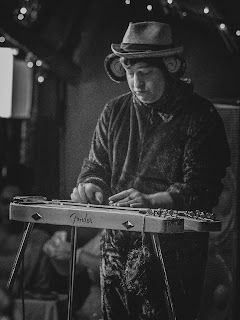 I think we're gonna try to get Shorty to wear the monkey suit at every show from now on. He looks right at home there, with his hat on. Haha...

Between songs, I thought it was a good idea to work on my stand-up routine with some monkey jokes that I had got together... You can see a very unamused Tara MiSioux and her husband, Josh, here. The jokes were bad. Like 2nd grader joke bad. I'd apologize, but I had a great time telling them. Everyone's groans amused me. 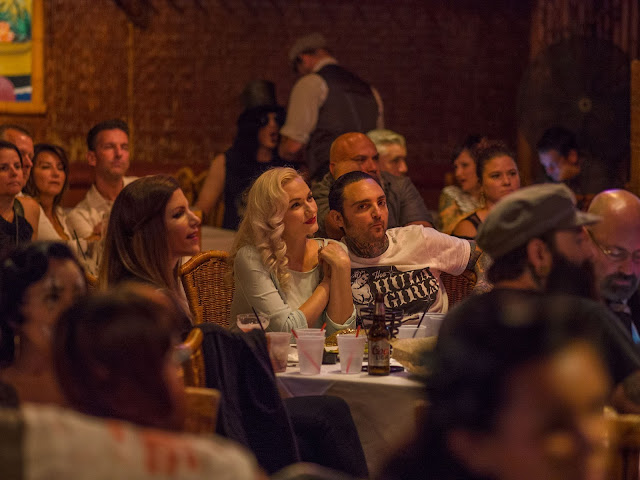 Back to what we were really there to do. Monkey around.
That was the last monkey joke, I promise. Actually, was that even a joke...?? Anyway... 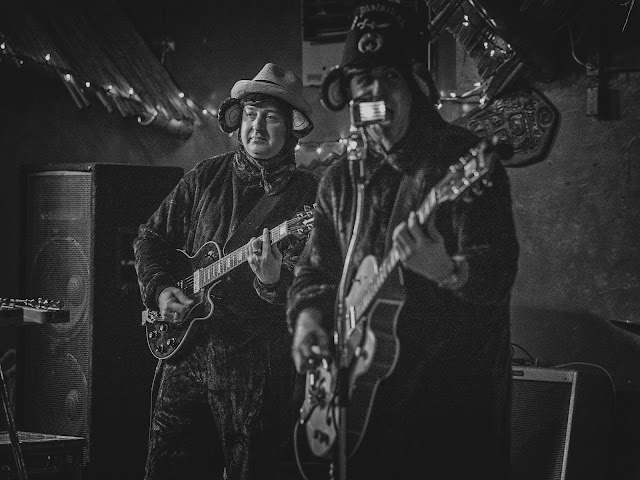 Doug and Kevin Stewart playing some surfy stuff. Kevin brought out his really cool Fender 6-string bass, ala the Tielman Brothers. Take a look at the Tielmans, if you're interested. 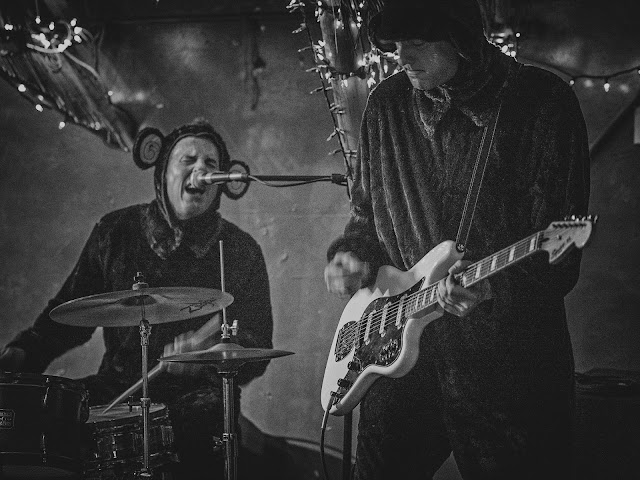 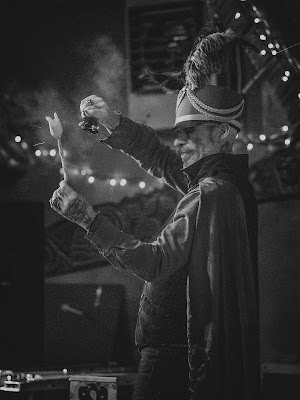 We wrapped up our set to prepare for the incredible magic of Christopher Wonder.

He did some plate spinning, some tricks with cigarettes, seemingly put a sword through his little one-eyed-dog's neck, and drank at least seven beers on stage, all while shooting off a cap gun and throwing confetti all over the place.

He does some amazing magic tricks, but even the stuff that doesn't exactly work out the way that it's supposed to is hilariously amusing. He's a phenomenal performer. A throwback to the golden age of sideshow performers. Another act that you HAVE to go see if you get the opportunity to do so.

Here he is, pulling an endless streamer from his little dog's ass. The dog was  super cute... Just kinda sitting there like, 'so, we're doing this again, huh?' 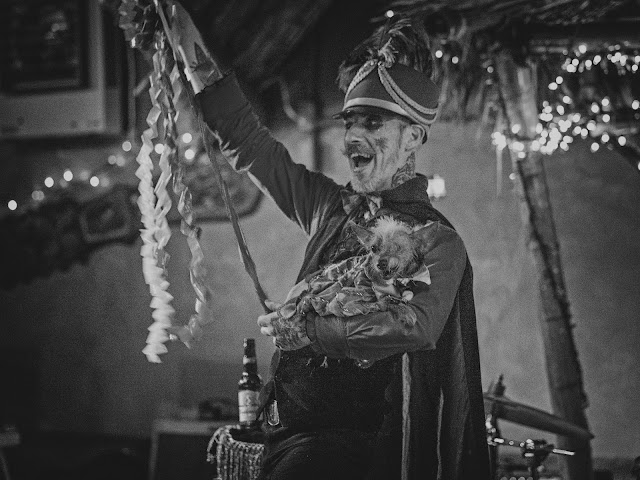 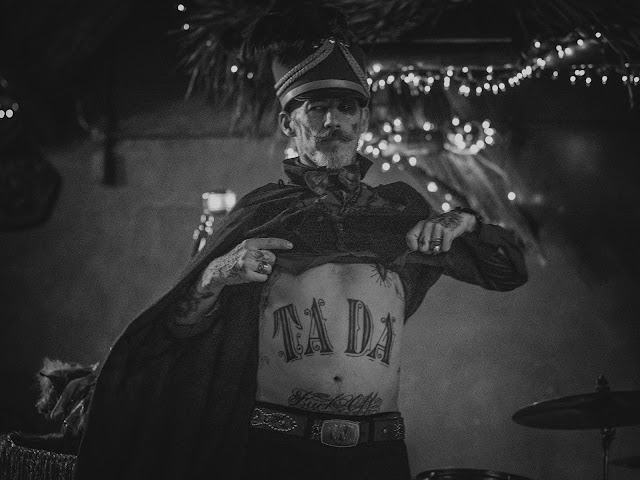 The only thing that could possible follow Christopher Wonder is a gorgeous and wiggly burlesque performer. The legendary Kitten DeVille got hearts racing with her performance to two live songs performed by The Hula Girls. We were super happy to have Kitten be our burlesque performer for the second Curse of the Tiki show. She was really great. 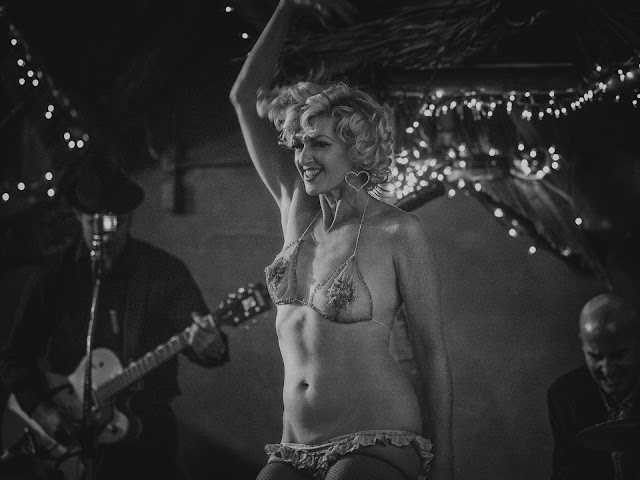 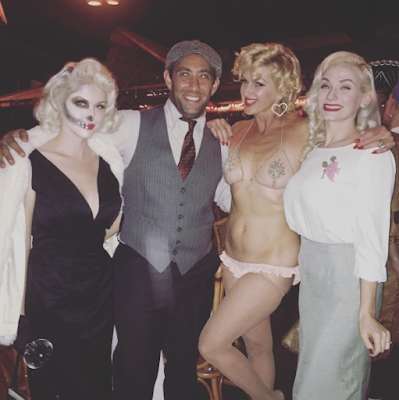 I want to thank all of the attendees of the event and all of the participants of the costume contest. All of your support really makes it worth it to me to put this show on. And I really DO enjoy producing this show. I love the idea of odd musical acts paired with weird and sexy performances... all set within the amazing tiki decor of Don the Beachcomber. It's so fun!

Thanks to everyone in the Jimmy Psycho Experiment, Maegan Machine and her boyfriend, James Rajewski, Christopher Wonder, our band members and go-go girls, Kevin Stewart, and Kitten DeVille.

Our emcee found Kitten, Tara MiSioux, and Ashlyn to take a picture with him at the end of the night. I want to thank my buddy, Nima, for being a great emcee and helping me to keep everything on schedule.

Certainly an event for the memory books! Maybe we'll see y'all again next year!