Hey friends, Spike here... The Hula Girls have been playing the Dagger Bar at Don the Beachcomber for over 5 years now. After playing so many nights while seeing volleyball or soccer or something wholly unrelated to tiki on the TVs in there, I had finally had enough. I was gonna create a DVD that actually helped the ambiance in the Dagger Bar while we played, rather than detract from it.

My solution is one DVD, filled with 2 hours of wild and weird clips of hula girls, surfing, B-movie monsters, hot rods, pin-ups, vintage tiki bars, and vintage commercials. I photographed a bunch of tiki apartment complexes and bars/ restaurants and scoured the deepest corners of the web for odd and amazing midcentury film. The clips last between 4 and 8 seconds at a time. It's fast paced so that you'll stay glued to it! 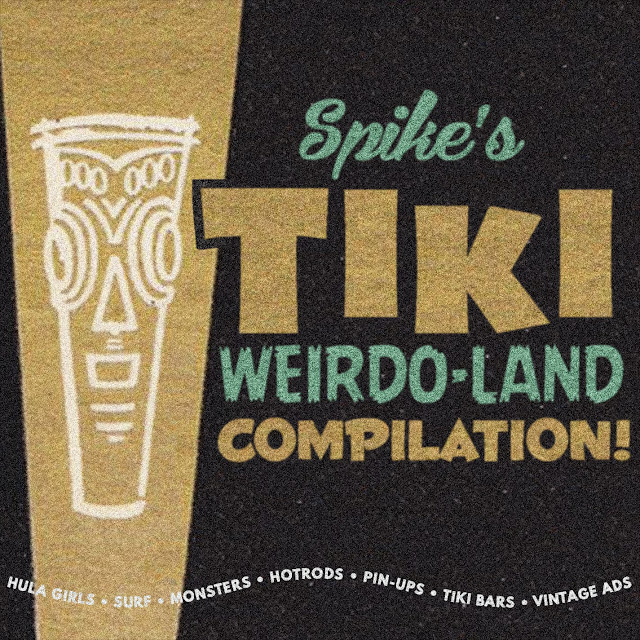 The video has played in the Dagger Bar at Don the Beachcomber since early 2015, to great acclaim. It changes the feel of the room when it's playing. Fun, mysterious, bizarre...!


Recently, I decided to make this DVD available for purchase. I reedited it and added a bunch of new (old) stuff. I think you'll love this DVD for your own tiki bar or for background visuals at a party! Or hell, just put it on, pour yourself a Suffering Bastard and sit back and watch in amazement! Can't wait for you to see it! 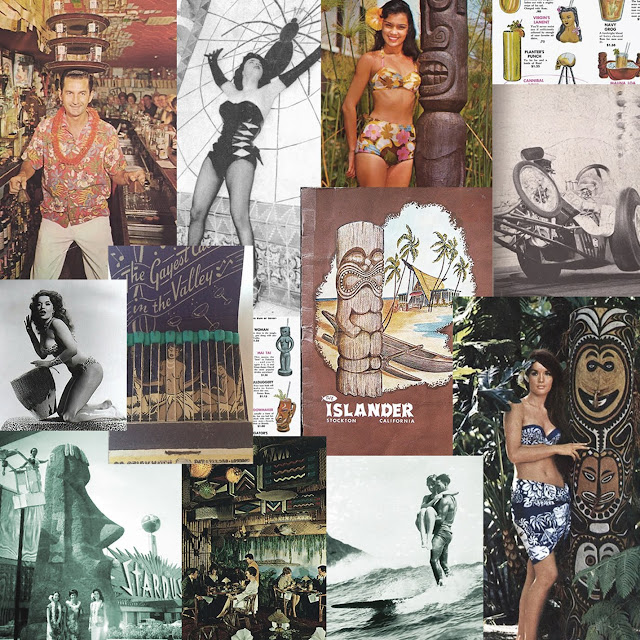 Get the DVD here!

The Tiki Luau at the Karmen Bar

Our buddy, Tom Stratton, shot some incredible photos of The Hula Girls during the Tiki Luau at the Karmen Bar this past Friday night. Enjoy!

Oh, and go find him on Instagram for more incredible photos of cool stuff @thedutchprovocateur 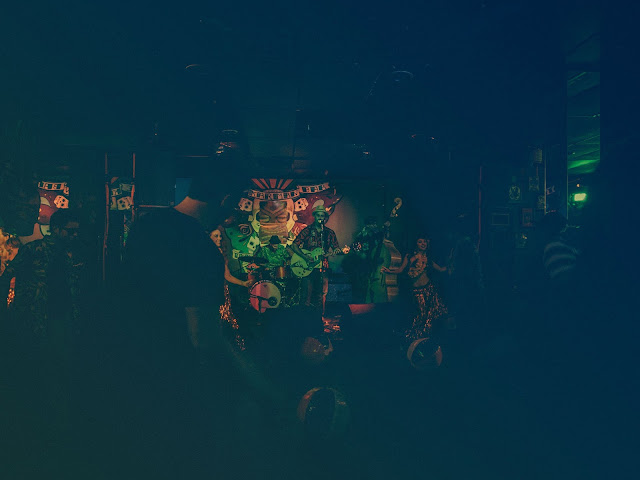 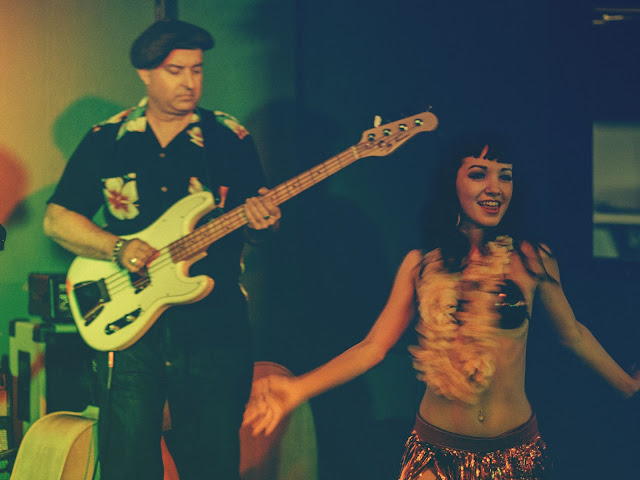 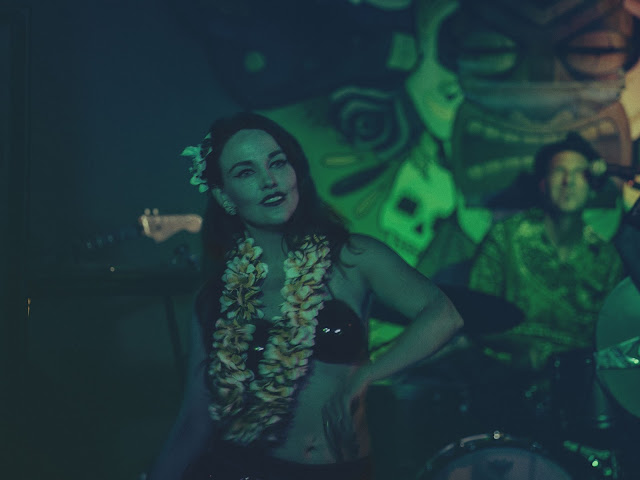 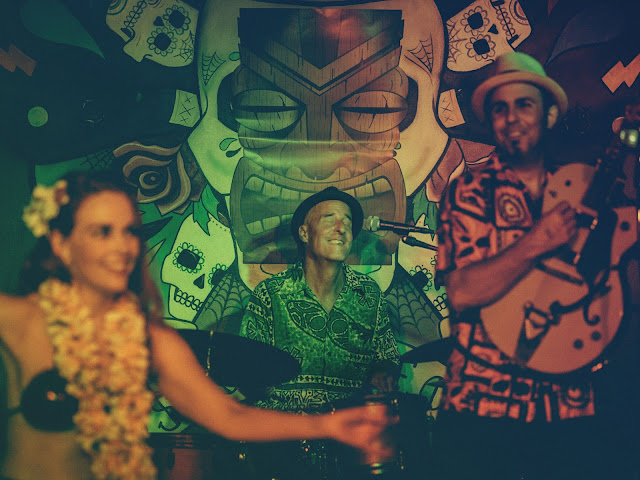 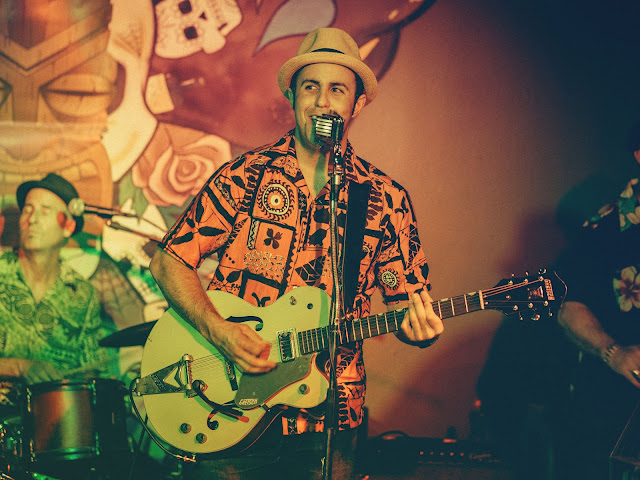 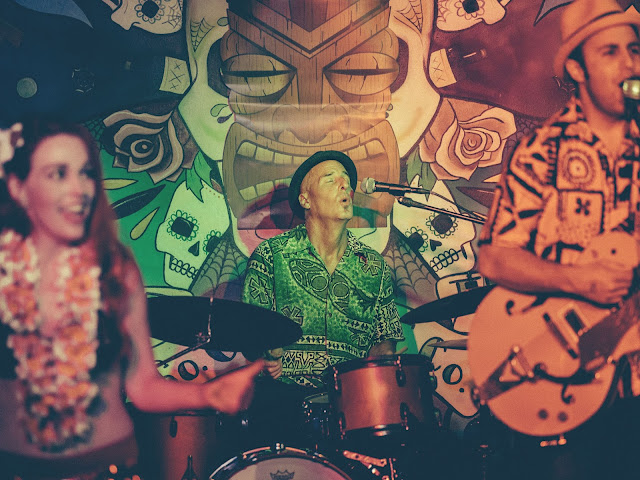 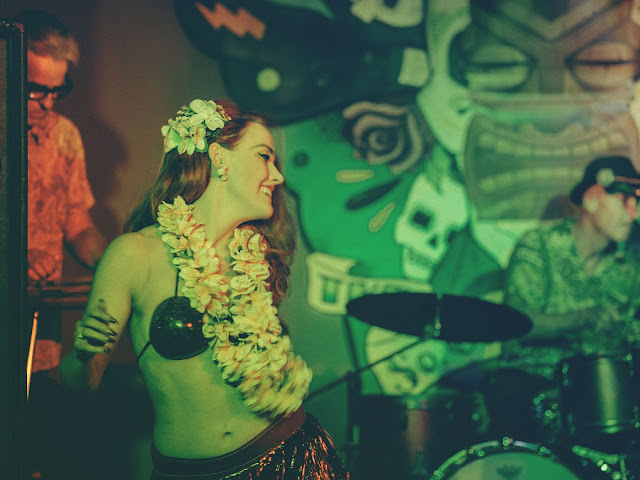 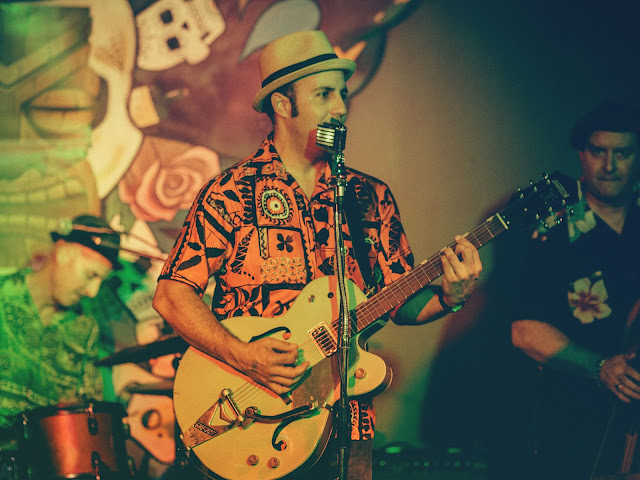 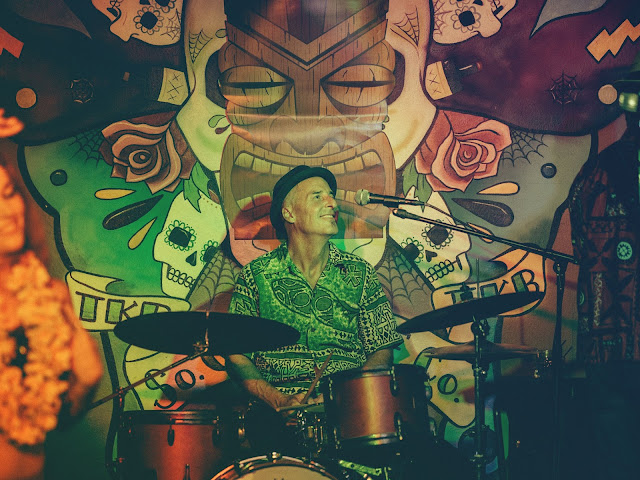 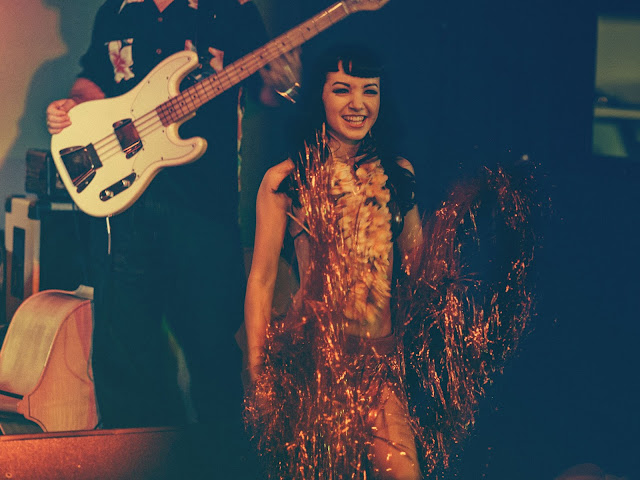 And I took this one, just after the show. The girls were recreating the image on the upper left of that door. Bettie Page and Tempest Storm in the 1955 stag film, Teaserama. 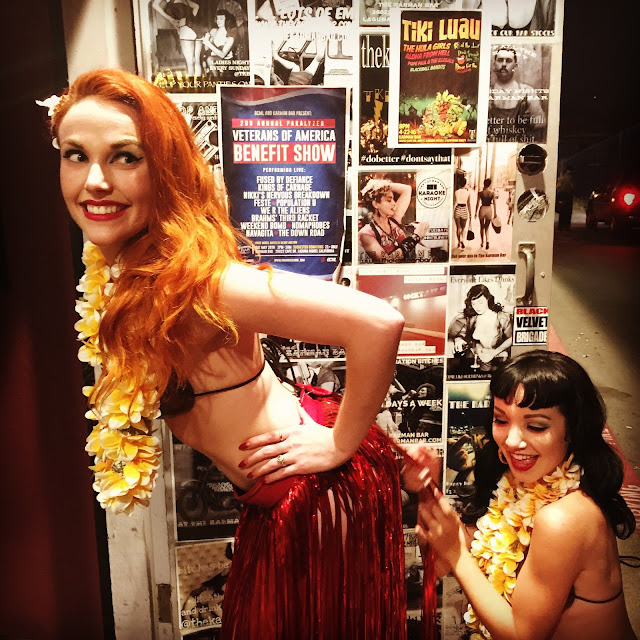 Laguna Niguel, we're comin' to ya! This Friday night at the Karman Bar.

We're playing with some great bands. Really looking forward to it! 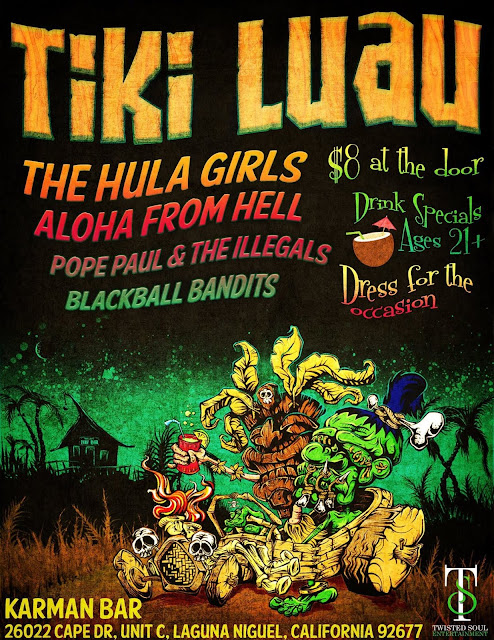 Miss Haylee Holiday and Miss Ginger Watson will be dancing with us!

Here they are, frolicking at the Viva Las Vegas Tiki Pool Party this past weekend. 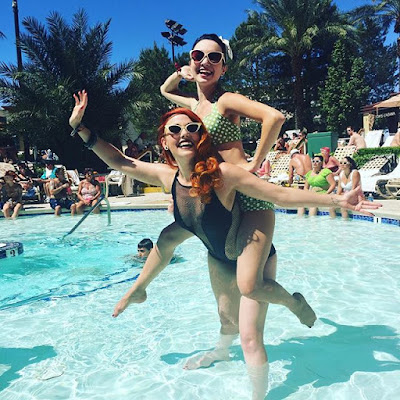 Friday, April 8th, at Don the Beachcomber. Get there early to get a good seat!
Miss Veronica Velvet and Miss Haylee Holiday will be dancing with us. 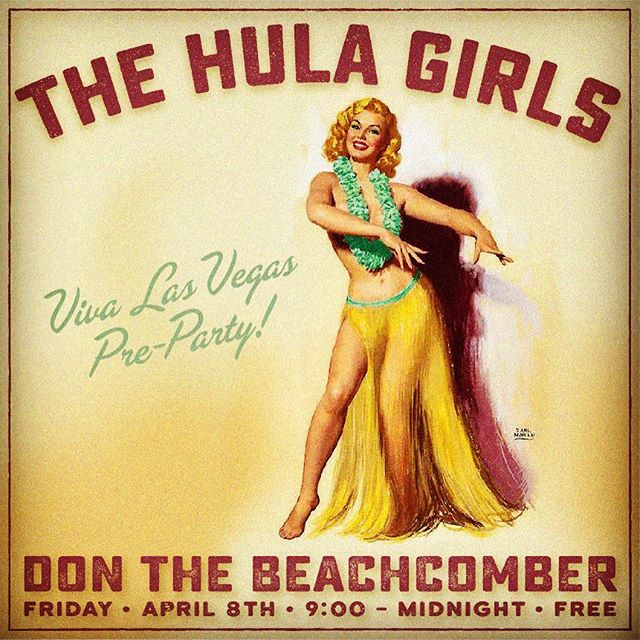 Don the Beachcomber on Maui

We just played my buddy, Sean Goodin's, wedding in San Diego a couple of weeks ago and now he's on his honeymoon in Hawaii.  Yesterday, he sent me pictures of the 1970's-built Don the Beachcomber at the Royal Lahaina Hotel in Ka'anapali, Maui.

Sean had intentions of mixing up a Mai Tai outside of the place to be the last to have a cocktail on the grounds of the Don the Beachcomber.

But guess what?
A door to the place happened to be unlocked. 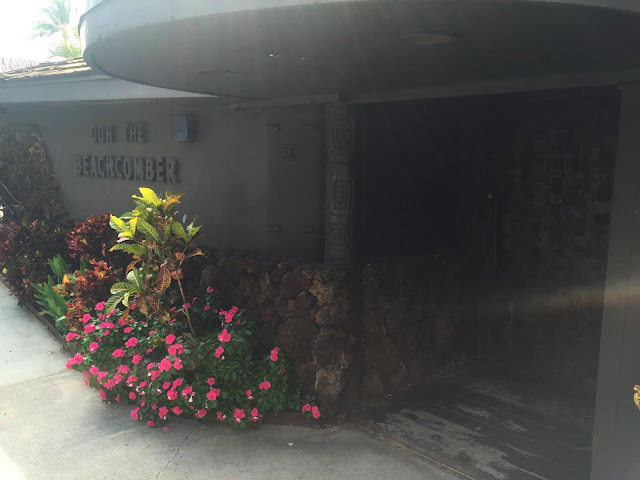 And he went in.
The following photos are of the closed Don the Beachcomber on Maui.

It's hard to say if the place is being prepped for a makeover or if its being used as a storage shed...

They are the BL37 Orchids of Hawaii lamps

Here's another Orchids of Hawaii lamp. This one is the BL34. There was a fish design on the side made from colored resin rock. You can kinda see it in the picture...

I'm not sure about the names of the lamps in the next two pictures, but I'd assume that they are Orchids of Hawaii as well.

Aside from the gorgeous shell covered lamps, howabout that giant carved pole?!

And a sad, sad tiki looking in to the once vibrant Don the Beachcomber.

Hope you found these photos as interesting as I did. It is amazing that the place has been closed and rotting away for 9 years! Hopefully someone will buy the place and keep the structure in-tact. There's a lot of cool architectural detail that remains there.


Thanks again to Sean for sharing the photos with us!

If you go back into the archives of Tiki Central, there's much more stuff to see about the Ka'anapali Don the Beachcomber, there.